Because it was winter the bus only runs every hour.   That means you have to choose your stops wisely because you will have to spend a whole hour (or two) there.  It was a bit disappointing because there were some places I would have liked to stop for a short while.  Also the bus only runs from 10 am until 4 pm.  There are two routes, the red and the blue.  The red is the main route going through downtown and the blue is the one that goes to Parnell and Eden.  They do offer a family fare which helps you save some money.  Or you can plan ahead buy the tickets on bookme.co.nz  (I love that site).  With your ticket you get discounts for several attractions in Auckland including the ones near the bus stops.

The first stop is Bastion Point which supposedly has awesome views but because of the time restriction it wouldn’t be worth spending an hour there.  The second stop is Kelly Tarlton’s Sea Life Aquarium, which is in the site of an old water treatment plant.  I would say this would be a better planned trip without being on a schedule.  Then the bus turns toward Parnell, a really nice suburb of Auckland.  You can stop at the Parnell Rose Garden or at the Trinity Church.  We chose to get off at the Auckland Museum.

This is a really cool museum.  Think war memorial  meets Natural History meets Maori culture.  It has a bit of everything having to do with  New Zealand.  The bottom floor has a lot of Maori artifacts, life in New Zealand and boats.  They love their boats!! 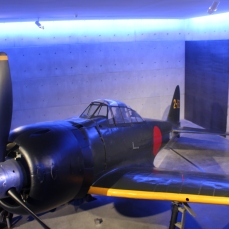 Then there is a lot of cool stuff in the natural history part of the museum including the cool birds of New Zealand including the extinct Moa.  They have a really hot exhibit on volcanoes since they live on top of several.  Explanations about the southern sky and how the Polynesians used it for navigation.  Plus a large collection of Asian art.

The top floor of the museum is all about the wars New Zealanders participated in.  Since New Zealand is part of the British Commonwealth and has been a dominion since 1907, but it contributed troops to many campaigns including the Boer War, WWI and WWII.  It contributed more troops per capita to WWI than any other country in the commonwealth.  Because of its high involvement there were many casualties and the museum does a wonderful job of remembering the kiwi heroes and their involvement.

There was a cultural performance going on when we were leaving the museum so we didn’t catch much of it.  Plus my husband hit his head on the locker and got a big gash.

The blue and red buses intersect at the museum.  So we switched to the blue line here.  You can go to the winter gardens from here but we decided to go to Eden Gardens instead.

Eden Gardens used to be a quarry that had become so run down that not even the government wanted it back.  It was then that a group of volunteers saw the potential to make it into a garden.  What a wonderful idea.  It has a huge selection of native plants plus a big gardenia collection.  We ate at their cute little cafe.  It was a wonderful way to re-energize after walking all the way to the top and seeing the great views.

Our next stop was Mount Eden.  It is one of the most popular volcanic cones around Auckland.  You get 360 views of the city and region.  I love the respect for the Maori belief that the center of the cone is sacred and they have signs asking you to not enter.  There are some great gardens around it too.

Rugby fans will be disappointed that we simply drive by Eden Park, the home of All Blacks.  But I think it would be an exciting experience going to a game there.  It’s huge and so full of history.

You can also stop at the St Luke’s Westfield shopping center, the Auckland Zoo or MOTAT.  We chose to get back to the red line and stop in Parnell Village.

Parnell is a beautiful suburb of Auckland with many restored Victorian homes, quaint shops and expensive cars.  We went to the Holy Trinity Church.  It is a beautiful church built in the Polynesian Gothic style.  They recently completed a new addition of a glass chapel.  It is so peaceful in there and the beauty of nature really helps you commune with the divine.

That was it for the day.  We met a really nice lady from Indiana on the tour and we got talking and enjoyed dinner together.  I love meeting people who love to travel and hearing their experiences.

I had heard that New Zealand had great hamburgers so we had to try one.  There was a Burger Boy nearby and we tried their burgers.  Zane had their regular cheeseburger, George had a Bad Boy and I had a Good Boy.  They were actually very good.  The meat had a grassy taste to it very different from the greasy taste we have here in the US.  But it was good in a different way. 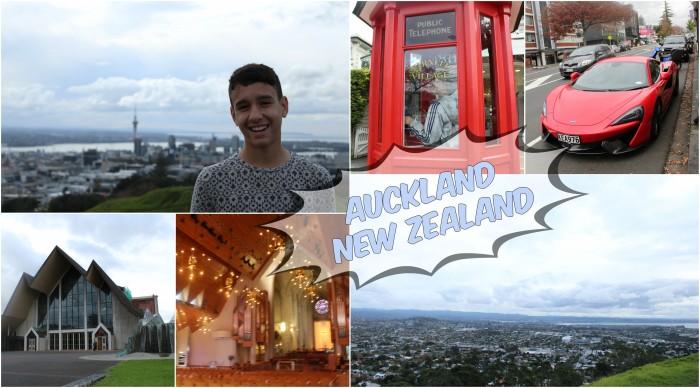